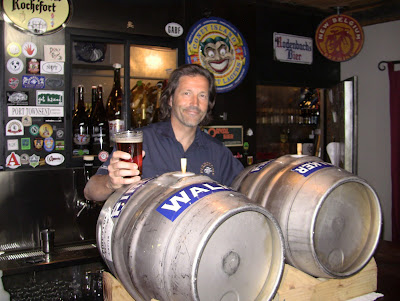 I started out day 7 of Seattle Beer Week 2012 by heading up to Cooper's Alehouse for the start of their IPA Championships - the conclusion of the blind tastings they held during their 10th Annual IPA Fest in April. 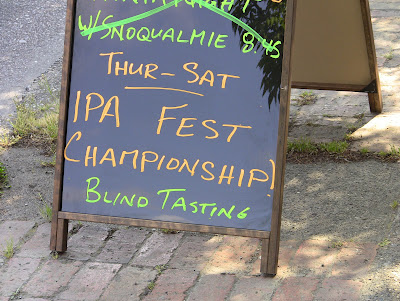 Wait - That Sign Says Thursday & It's Only Wednesday.  D'oh!


Unfortunately, SeattleBeerWeek,com had the date listed wrong, so I showed up for a non-event (it was the next day - and I'd missed a 'correction' post from Cooper's Alehouse about it).  So, instead, my wife and I each just had a couple of beers, as Cooper's always has a great tap selection, and then readied ourselves for the evening's main event, the Firestone Walker & Homebrew Chef Dinner, "And Now For Something Completely Different" at Brouwer's Cafe. 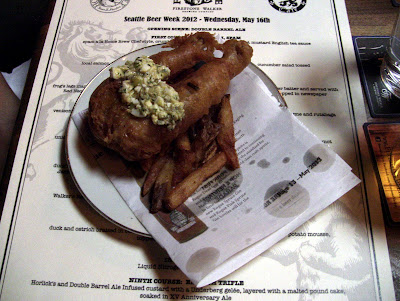 
This dinner is an annual Seattle Beer Week event at Brouwer's.  I missed the first one, which took place during Seattle Beer Week 2010, but I attended the 2011 event and plan to keep attending these dinners each year, as long as Homebrew Chef, Sean Paxton, Firestone Walker Brewing Co. and Brouwer's Cafe continue to put them on. 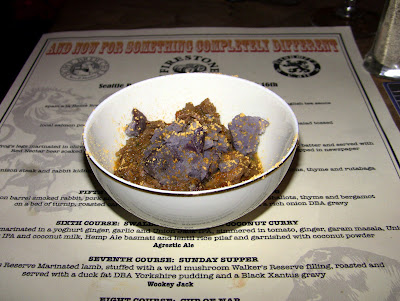 A 'Cup Of Nap' - Someone Pass Me A Pillow


This year's offering was a 10-course dinner, inspired by a combination of Brouwer's Cafe's always outstanding food with English Pub cuisine.  The result was a Monty-Python-Themed dinner, with amazing and original creations cooked up by Sean Paxton, and a few special beer surprises from Firestone Walker. 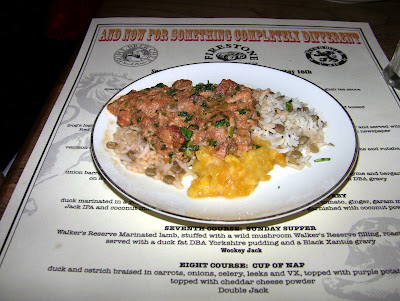 Was The Swallow Who Carried The Coconut For This Dish African Or European?


Spam anyone?  Salmon Mousse?  Or, perhaps, a Swallow Carrying A Coconut?  These were just a few of the course-names inspired by Month-Python; such as the 'Closing Scene', which was 'wafer thin'! 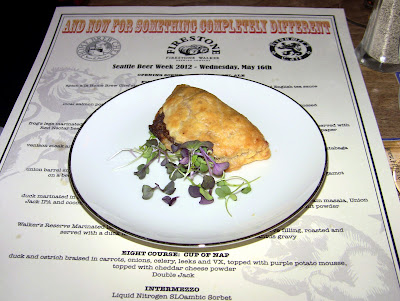 
I'm familiar with nearly all of Firestone Walker's beer offerings but I've never tried any of their sour beers, which only makes sense, since they haven't been officially released to the public yet. The first was Firestone Walker's new Agrestic Ale.  This is a sour they've been working on for a while, and paired it during the meal with a duck-based coconut curry for course #6. 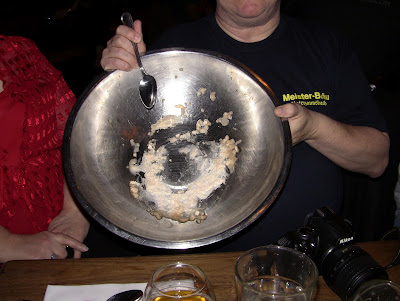 
We were also treated to Firestone Walker's new SLOAmbic (a lambic), infused with liquid nitrogen to create an instant SLOAmbic Sorbet.  The preparation and presentation for the sorbet was a lot of fun.

We finally finished our dinner and got out of Brouwer's at close to 12:30AM, after which I took some time to enjoy a nice after dinner cigar.  We didn't make it back home until close to 2:00AM, but we had to get to bed, because we had to rest up for day 8 - Sour Fest right back at Brouwer's Cafe. 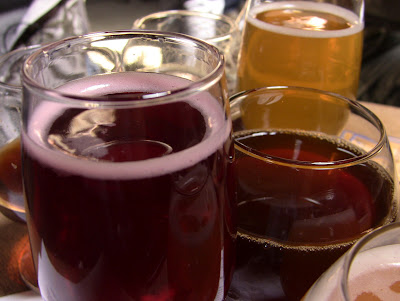 A Few Of Our Sour Beer Selections


I'm not as knowledgeable about sour beers as I am about other styles, but in the interest of expanding my beer education and appreciation, we were back at Brouwer's just 10 hours after leaving the night before for Sour Fest 2012. 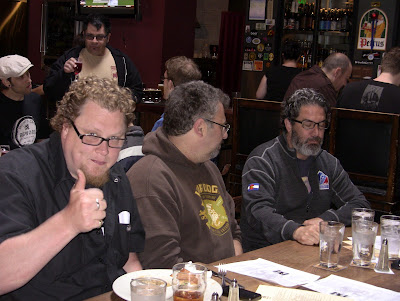 
This annual event is one of the major festivals Brouwer's puts on each year (in addition to the Back In Black Stout Fest from earlier this week, Hopfest, Big Wood and, of course, the Hard Liver barleywine festival).  The doors opened at 11:00AM and Brouwer's filled up fast.  We were a bit surprised that we weren't the only ones crazy enough to be at Brouwer's so late the night before and be right back again the next morning.  In fact, we ran into quite a few people from the previous evening. 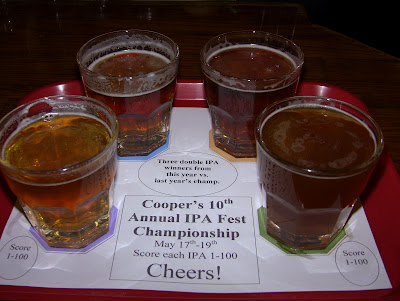 After leaving Sour Fest, I wanted to head back to Cooper's Alehouse for the IPA Championship blind tasting I'd believed was starting the day before.  I ordered by taster tray, took a few notes and now I just need to wait for the results.  Since all four beers on the tray were winners from the previous rounds, the decision was a bit difficult and all the beers scored well (on the 1-100 scale Cooper's uses for these events).  I'll update this post with the results, once Cooper's reveals the blind taps and the winner.

Now I need to go get ready for day 9.  I'll be hitting up 'Whiskey 'n Beer Boilermakers' with Woodinville Whiskey at Brave Horse Tavern, and then heading up to Burgundian in Tangletown for the 'HUB Invasion'.  I'll be missing day 10 of Seattle Beer Week due to a previous personal obligation, but I'll be back for the final day - attending the customer appreciation BBQ at Super Deli Mart in West Seattle.

Drink responsibly and stay safe out there.
Posted by Beer Monger at 12:42 PM