Real Life Can Be An Intrusion At Times As my regular readers know, I'm currently taking a BJCP study course, designed to help increase my beer knowledge and beer tasting skills.  Unfortunately, I've been so busy with so many other things in my life lately, that I haven't been finding enough time to study for the class/exam nearly as much as I should be.

At our last class, we were given a 1 1/2 hour take-home practice exam.  If I were to take that practice exam right now, I'd do fine on much of it, but there's also quite a bit I wouldn't be able to complete.  I need to be able to clearly differentiate between different (but similar) beer styles including aroma, appearance, flavor and mouthfeel, know the history of at least one major ingredient of each sub-style, name commercial examples, and describe the similarities and differences between the sub-styles.

And that's just one question.  There are several other that go into a lot of detail regarding specific styles and their attributes.  I think it's one of the most difficult portions of the exam to prepare for - becuase you never really know what beer styles will be on the exam.

I really don't like to make excuses, so I'll just admit it.  I simply haven't been finding the time to study enough. Between my regular job, getting my house on the market, looking for a new place to live, brewing/bottling for a few upcoming beer competitions, running for the Flying Bike Board of Directors, etc. etc. I have quite a lot on my plate right now.

I've thought about dropping out of my BJCP class and trying again when I don't have so many other things going on to distract me, but I haven't decided yet.  I'd like to try to spend the next few weeks studying hard and trying to get caught up in preparation for the exam (which I've already paid for anyway), before I decide if I think I can handle the exam of not.

One of the reasons I'd like to take the exam now (this October), is that it will be the last time the BJCP Certification Exam is given in it's current format.  It will be changing next year to a 2-part format, with an online written exam (timed to make it more difficult, since it's essentially an 'open book' test that way), and a scheduled tasting portion, where your tasting and evaluation skills are measured.  Honestly, it may be easier to get certified taking the exam in the new format next year, but I'm hoping to get at least one crack at the old format before it goes away.  I believe it's a more difficult exam and, even though I'm struggling a bit right now, I like to challenge myself.  And right now, I'm facing a challenge.

So, please excuse that I haven't been posting as often lately, but that may continue for a few more weeks, as I try to ramp up the amount of time I'm devoting to studying for my BJCP exam.  Wish me luck.

Drink responsibly and stay safe out there.
Posted by Beer Monger at 6:59 AM 0 comments

Over the past few weeks, I've been busy cramming my head with craft beer knowledge.  The Beer Judge Certification Program (BJCP) is about more than just tasting beer.  It also requires that you have a strong understanding of the entire brewing process for all major styles of beer, from malting grains all the way to the glass.

I've had four classes so far, covering various topics from malting and kilning grains to the mashing process, what enzymes and reactions take place at what different temperature ranges, how different water chemistry and other factors can have a major influence on the finished beer, etc. etc.  As I've been saying all along, it's a lot to learn.

Next week we have no class due to a schedule conflict, so I'll be using it as a self-study week.  We were given a partial practice test to work on to help prepare for the real exam coming up in October, so I'll be going over that in detail next week.  Also, luckily, there have been enough cancellations that I have made it from the waiting list into the October exam.  So no matter what happens, I'll be taking my first crack at the BJCP exam this October.  I'm hoping for a score of at least 70 for my 'Certified' ranking, though I'll take a 60 if that's all I can get ('Recognized' rank).  The first few mini practice tests I've taken in class tell me that I still have a lot of studying to do.

My Fly-PA Entry Is In:

Last night, I finally dropped off my 'Summer Snob' Imperial IPA entry for the Flying Bike Cooperative Brewery 'Fly-PA' competition at Larry's Brewing Supply in Kent.  I'm pretty happy with my entry.  Since bottling it for competition a couple of week back, I've been drinking it myself and sharing some with friends.  I've gotten lots of positive feedback and accolades, so I'm hoping I'll do well in the competition.  It would be great if, somehow, I managed to win & my Imperial IPA became Flying Bike's very first beer.

At this point, I have no idea how many other entrants I'm up against, but Flying Bike has announced that the judging will be taking place this coming weekend.  So, hopefully, we won't have to wait too long for the results.  Wish me luck.

There are also a few other homebrew competitions coming up soon in the area, so I may enter my IPA into more than one contest.  I bottled a few extra bottles just in case I needed more for other competition entries.  I may even bottle some of my Oktoberfest soon for a 'Novembeerfest' competition coming up in November. 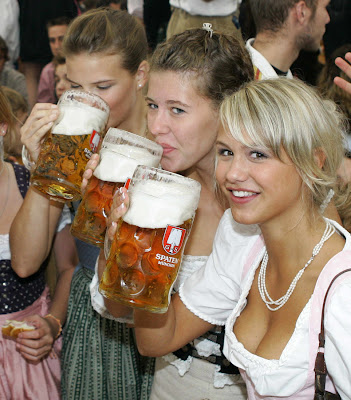 The first official day of Oktoberfest this year is September 17th.  In 1994, the schedule for Oktoberfest was modified in response to German reunification so that if the first Sunday in October falls on the 1st or 2nd (which is the case this year), then the festival would go on until October 3 (German Unity Day).

My regular readers know that I've had my Oktoberfest lager (the first lager beer I've ever made) conditioning in a keg in my beer fridge since June of this year.  I brewed it in early May and wanted at least a 3-month long lagering period before serving the beer.  I haven't tasted it since moving it to the conditioning keg back in June but, at that time, it tasted great and should only get better over time.

This year, I plan to do things up right by making a full, traditional German meal on September 17th.  Right now, my menu consists of Jägerschnitzel, Käsespaetzle and Red Cabbage.  I'm also considering making some German pretzels for appetizers.  To do those right, I'll have to pick up some lye.  True German pretzels are dipped in a lye solution just before baking.  It's what give them that distinctive texture and flavor that says you're enjoying a real German pretzel.

Until then, I'll keep studying my BJCP materials, enjoying my Summer Snob Imperial IPA, and hoping for the best in both the Flying Bike Fly-PA competition and the Flying Bike Board Member elections.

Drink responsibly and stay safe out there.
Posted by Beer Monger at 3:52 AM 0 comments