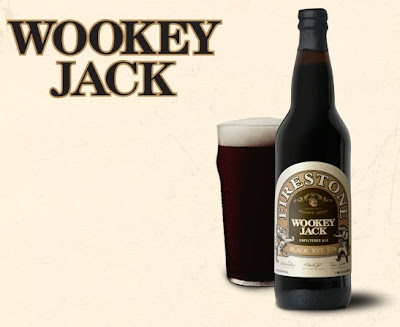 As my regular readers know well, I'm a big fan of Firestone Walker Brewing Company.  The depth, complexity, quality and consistency of their beers is, in this writer's opnion, second to none.  Not only do they make the multi-award-winning Double IPA, Double Jack (which just happens to be my favorite Double IPA - and possibly my favorite beer - I even/still picked it as my favorite during a recent blind tasting at Cooper's Alehouse in Seattle), their pale, barrel-aged and anniversary offerings are simply amazing, with intense, complex flavors that dance wonderfully on the palate.

Another thing you may know about me is that, thus far, I haven't been a big fan of 'black IPAs'.  I love hops and I also love dark, roasty beers, but somehow the combination of dark, roasted malt and hop bitterness doesn't agree well with my palate.  I've only found a couple of black IPA's (which I believe should be called IBA's - get it?), that I've enjoyed.  However, I have them so infrequently, I couldn't even tell you without checking my Untappd log which ones those were.

So I'm still willing to give new black IPAs a try every now and then.  However, if anyone is going to do one right - one I might actually enjoy, I trust it to be Firestone Walker.  Their newest creation, a black IPA dubbed 'Wookey Jack' has just been released.

According to Firestone Walker:

"Wookey Jack is our first foray into the dark outer world of black IPAs.  Rich dark malts and spicy rye careen into bold citrus laden hops creating a new dimension in IPA flavor.  This brew has been left unfiltered and unfined to retain all of its texture and character.  At 60 IBUs, Wookey Jack is gnarly on the outside yet complex and refined on the inside."

I think it's interesting that Firestone Walker decided to use rye in Wookey Jack.  I'm certain none of the black IPAs I've sampled so far have contained any rye malt.  Rye beers are another thing I don't have often; but that's not becuase I don't enjoy them.  It's simply that I don't see a large number of rye offerings on tap (or even in bottles or cans) most places.

So be on the lookout for Firestone Walker Wookey Jack on a tap or in a bottle shop near you very soon.  In fact a little birdie, named Phil, told me yesterday that Brouwer's Cafe will be putting a keg of Wookey Jack on tap sometime today, May 3rd.  I might just have to make it down there this afternoon and see if this Wookey is too hairy for me or if I'll finally find a black IPA - excuse me - IBA that I'll truly enjoy as much as the regular and double IPAs I enjoy.  My faith in Firestone Walker is high, and my hopes are up.