It's Catsino At Beveridge Place Pub 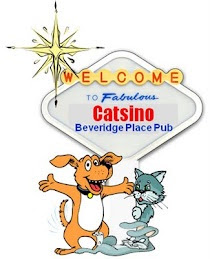 Today only - from 2:00 - 6:00PM it's Catsino at Beveridge Place Pub in West Seattle.  The whole pub will be turned into a casino, with the proceeds benefitting the Furry Faces Foundation.  You'll be able to play the games below as well as bid on some auction items as well.

"Catsino is an afternoon of “recreational gaming” so you’ll have a great time playing variations of Hold’em, Craps, Blackcat 21, and Toss the Pigs among others while raising money for Furry Faces Foundation.

The funds raised will provide for the spay/neuter of pets whose people are on restricted incomes, and also feral cats who live in colonies.  Local businesses and animal rescue groups are adopting the gaming tables, dealing out the cards, rolling the dice and making up some unique rules.  For more information, please visit http://catsino.blogspot.com/."

The games you'll be able to play will include:

So put on your best poker face and get down to Beveridge Place Pub today for some Catsino fun!  Keep those furry faces smiling!  Tickets for this event are $25 at the door.

Drink responsibly and stay safe out there.
Posted by Beer Monger at 10:58 AM