'Now For Something Completely Different' With Sean Paxton & Firestone Walker

At last year's Seattle Beer Week, I attended an amazing dinner at Brouwer's Cafe, featuring the Homebrew Chef, Sean Paxton, and beers from one of my favorite breweries, Firestone Walker.  (You can read all about that amazing 10-course, 12-beer dinner HERE.)

Cajun Prawns Brined In FW Pale 31With Pale 31 Beer Batter - 2011
This year's Sean Paxton/Firestone Walker dinner was recently announced and tickets went on sale yesterday - 4/3.  If you plan on attending this year's dinner don't delay.  There are only 85 tickets available and this event always sells out quickly.  Tickets are $125 per person.  You can follow this link to purchase tickets.

Trust me, this is an event not to be missed.  If you follow Sean Paxton on Facebook or Twitter, you've probably seen recent posts about the amazing dinners he put on for both San Diego Beer Week and San Francisco Beer Week.  Now it's our turn! 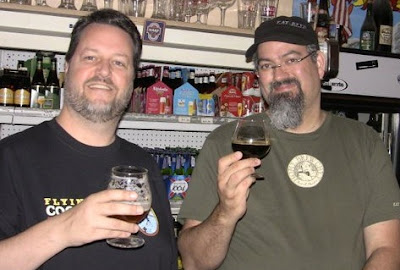 Me With Sean Paxton At Bottleworks During Seattle Beer Week 2011
Drink responsibly and stay safe out there.
Posted by Beer Monger at 3:33 AM