The Vanberg & DeWulf Coast To Coast Toast Is Tonight

Tonight at Brouwer's Cafe is an event called the Coast to Coast Toast.  This is a celebration of the 30th anniversary of Vanberg & DeWulf importers of fine Belgian beers such as: Scaldis, Dupont, Foret, and Moinette just to name a few. 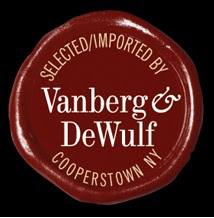 Vanberg & DeWulf are the original, most ardent and proselytizing importers of Belgian beers in the USA. It’s no wonder they’re called the “Belgian Experts”: ever since 1982, their mission has been to support independent, family-run breweries and indigenous beer styles that express the spirit of a place. The founders, Don Feinberg & Wendy Littlefield, were the first Americans inducted into the Belgian Brewers’ Guild. They published the first edition of “The Great Beers of Belgium” by Michael Jackson, and brought Duvel, Rodenbach, and the lambics of Frank Boon to the States. In the 1990’s they pioneered cooking with beer education at the CIA and The James Beard House. Don & Wendy conceived of and built Brewery Ommegang in Cooperstown, NY, thereby constructing the first farmstead brewery to be built in over a century… on a former hops farm, no less. Their brewery Ommegang was the first brewery to make all bottle-conditioned, cork-finished, exclusively Belgian-style beers in America. Every beer in their current portfolio is a major or a minor classic.

I honestly don't drink enough Belgian beers, even though I really do enjoy them.  Perhaps this event will be a good way for me to rediscover some Belgian classics I've been overlooking or not getting enough of.  I'm not 100% sure I can make it tonight, but I'm sure gonna try and I'll at least have a few great Belgian beers today to celebrate.  Care to join me?

If you can't make it to Brouwer's Cafe, you can celebrate by picking up a few good Belgian Beers at your local bottle shop.  Try looking at: 99 Bottles, Bottleworks, The Last Drop, or Beer Junction for your Coast to Coast Toast needs.  If you're in Portland, try The Beermongers.
Drink responsibly and stay safe out there.
Posted by Beer Monger at 3:45 AM