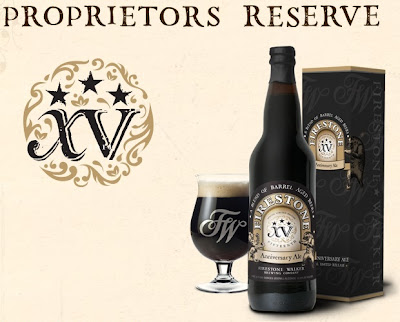 As my regular readers know, I'm a big fan of Firestone Walker Brewing Company out of Paso Robles, CA.  My favorite beers in the World right now all come from their 'Proprietor's Reserve' series, which consists of:

Brouwer's also says they have another little 'surprise' in store for us on that evening, but for now they're keeping us in suspense as to what the surprise might be.  Frankly, I'm hoping they'll put on a keg of a rare beer from Firestone Walker known as 'Sticky Monkey'.  It's a beer they usually only make for blending purposes, but I was fortunate to have some on tap at Brouwer's last year after the Firestone Walker & Homebrew Chef collaboration dinner I attended back in May of this year.

I still have at least one bottle each of Parabola, Walker's Reserve Porter, Abacus (Soon to be renamed §ucaba), some XIVth Anniversary Ale at home.  Once I get my hands on some XVth Anniversary Ale (and some XIIIth Anniversary Ale) bottles this year, I'll have to pick up a Double Jack, have a few good friends over and have an all Firestone Walker Reserve Series tasting.  Talk about a beer-gasm!  I'll have to see what kind of menu I can come up with to accompany this incredible lineup.  My compliments to the Firestone Walker Brewmaster and to their master blenders.

Drink responsibly and stay safe out there.
Posted by Beer Monger at 3:11 AM