Is 'Children Welcome' Really Such A Good Idea? 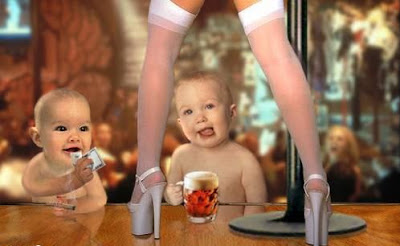 It's a sign you see often these days, at more and more bars around the Puget Sound (sometimes it's 9:00PM, but the basic idea is the same).  It means, while visiting many local pubs, taverns and breweries, you'll often see teenagers, young kids and even babies around as you enjoy your drink(s).  What prompted this change, and is it really such a good idea?

I first started seeing these signs pop up in a few pubs/taverns I frequent a little over a year ago.  One of the places I know, Big Time Brewery in Seattle's University district, installed a 'railing' around the bar area just to facilitate this rule (children under 21 must remain outside the railing that indicates the 'bar' area at all times - even before 8:00PM).  And now, it seems even more places are adopting this rule; the latest one being The Yard Cafe in Seattle's Greenwood neighborhood.


I believe the reasons behind this change are twofold.  First: one argument against having children and especially babies in bars used to be the smoky environment.  It just wasn't considered a good idea to allow children in a place where so many people were smoking.  However, since Seattle's ban on smoking went into effect a few years ago, this is no longer a concern for parents for whom this was an issue.

The second reason we're seeing more places allow children, I believe, is the economy.  Most pubs, taverns and breweries/brewpubs serve at least some food.  Their logic (especially for places like Big Time, where the under-21 college crowd is a big part of the population in the area), is that they could pull in more food revenue if they allowed those under 21 in until 8:00PM or 9:00PM.  That may be so, but is it worth the message we're sending the younger generation?

Before going any further with this, I'd like to clarify something.  I'm talking specifically about pubs, taverns and breweries/brewpubs where the bar area is not a distinctly separate area from the 'dining room' area of the establishment; and I'm not counting the railing some bars have a few feet back from the bar as a 'separate area'.  I have no problem with parents who want to bring their kids to places that are primarily restaurants, but also happen to have a bar - such as places like Red Robin, Jimmy Mac's or even The Pike Brewing Company (which has it's bar area(s) completely separated from the main 'dining room' area).

Of course, there is also a trend building in this country to no longer allow children in some restaurants either.  A few establishments around the country have discovered that refusing to serve children is not considered discrimination, and they have received enough requests/complaints from their patrons about unruly kids, screaming babies, etc. to warrant a ban on children in their establishment.  I definitely don't think all restaurants should go this route, but for some establishments, or ones where it's clear the parents who bring in children have no idea how to watch or control them, it is something to consider.

When I was a young boy I went to many restaurants with my family, just like we've all done.  The main difference I see between back then and today is that, back then, if I started to misbehave at all, I'd either get smacked and/or be taken outside by one of my parents until I could calm down and behave mysef or we would have to leave.

Far, far too often today that's definitely not the case.  I see and hear kids in restaurants/pubs/taverns/etc. that whine endlessly, scream at the top of their lungs, run around the table (and other people's tables), while the parents completely ignore them and just carry on with their meal, drink or conversation as if they're oblivious to the child's behavior.  I'm sorry, but this is not OK.  If you want to take your kids out to a restaurant, learn how to control/discipline them first and don't let them scream, run around bothering other people, etc.


I'll be honest here.  One reason I'm against having kids in bars is that I don't want to have to deal with kids running around, running into me (which has indeed happened to me on several occasions) or babies screaming in my ear while I'm trying to relax and enjoy a drink at a type of establishment that was, for decades, 'adults only'. Nobody wants a piercing screech in their ear while they're trying to relax and unwind after a long day.  And, I'm sorry, but I will not watch my fucking mouth just because you decided to bring your kids to the bar. Another thing for parents to consider is the message they're sending to their kids.  A great deal of what children learn in this World is learned by example from their parents.  If parents get into the habit of bringing their kids to bars a lot, the kids will learn that is where you go/what you do when you want to hang out with friends.  Many of them will learn this lesson quite well, and likely won't wait until they're 21 to start enjoying some drinks with some friends; since it's what they see their parents doing to relax and have fun.  In addition, how wise is it to bring your kids/babies to the bar with you, have two, three four or more drinks and then drive home with the kids in the car?
Why is it suddenly OK to bring kids into bars now that there's no more smoking?  What about the drinking?  That's off-limits for kids too, yet we're now pushing it in their faces with this new rule where kids can hang out until 8:00PM watching everyone else drink, listening to them swear, etc.  Again, kids learn by example.  What are you teaching them by haging out in bars with them?

Some of you may be wondering, so I'll just tell you.  I don't have kids.  My wife and I tried but, sadly, it just wasn't in the cards for us.  Even if I did have kids, however, I believe my views on this issue would be exactly the same.  I would make sure my children were well behaved whenever I brought them to a restaurant, and I would absolutely not bring my kids along if I was going to a pub, tavern or brewery with no division between the bar and the rest of the establishment.

My view on this issue may be an unpopular one, but I'm not alone in my views.  In fact, I know of one establishment in Seattle that will never allow kids.  That establishment is Brouwer's Cafe.  And Brouwer's owner, Matt Bonney, is also preparing to open a new bar in the Tangletown area called The Publican - opening later this month, where he has confirmed that children will not be allowed.

In my opinion, part of drinking responsibly is considering what example we set.  By bringing children into the bars, we're just increasing their exposure to an environment where they really shouldn't be until they're of legal drinking age and thereby increasing the chances that they might start drinking at an earlier age, by following their parent's example.  So the next time you're packing the kids in the car to head for the bar, consider what message you're sending them.

Drink responsibly and stay safe out there.
Posted by Beer Monger at 3:53 PM