My Trip To Portland

This past weekend was my birthday; and for my birthday I wanted to continue my quest to visit several different breweries.  This time, however, I decided to leave the confines of WA, leave the motorcycle at home and head down to Portland for a day trip with my wife, Lynn.

On the agenda was Gustav's (an excellent German restaurant in Vancouver, WA, where we stopped for lunch), Hair of the Dog Brewing, Hopworks Urban Brewery and Laurelwood Brewery.  I'd like to take this opportunity to again thank my wife, Lynn, for being my designated driver for this little adventure. 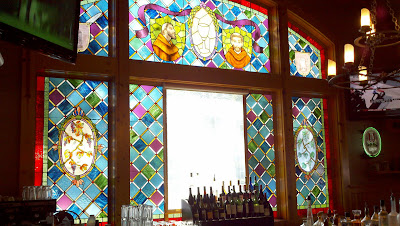 The Stained Glass Behind the Bar at Gustav's
In fact, they have such a great selection of German and other European beers that Gustav's owner is strongly considering opening up a separate, German style pub in Portland in the near future. 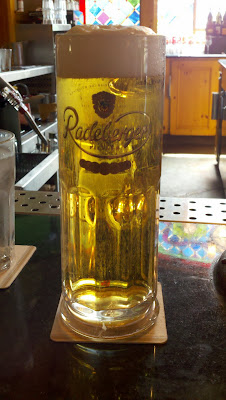 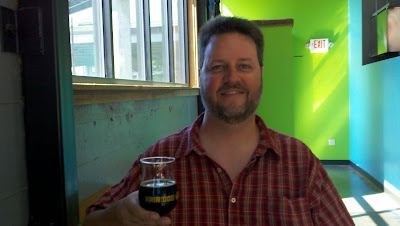 Enjoying my Cherry Adam from the Wood
And wouldn't you know it, they just happened to have my very favorite version of Adam on tap: Cherry Adam from the Wood from 2009.  This is Adam that has cherries added and is aged on Oak.  I've only had it four or five times, but it is always so delicious!  I had a full 12oz pour and then took a look at the menu. 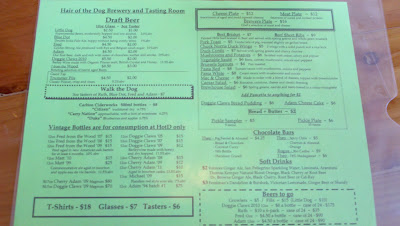 The Menu at Hair of the Dog (Click to Enlarge)
For a brewery that only has, technically, a 'taproom', their menu was rather impressive.  Painted Hills Beef Brisket, Beef Short Ribs, Duck Confit, Brussels Sprouts, Red & White Pasta, a few salads and deserts like Adam Cheesecake or Doggie Claws Bread Pudding.  Since I'd already had a full meal at Gustav's, I just decided to get a 'Walk the Dog' (3oz tasters of Ruth, Blue Dot, Fred and Adam - shown below﻿) and a piece of Adam cheesecake. 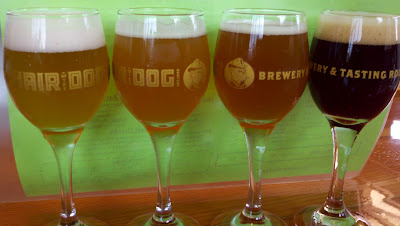 My 'Walk the Dog' Sampler
The 'Walk the Dog' taster hit the spot.  While I do Love Adam, it can get a bit heavy if it's all you're drinking, so it was nice to break things up a bit.  The Adam cheesecake was painfully dry, just how I like it, and served with a drizzle of an Adam reduction on the plate.  Delicious.
The only real problem/annoyance I noticed while visiting Hair of the Dog was the bar staff.  Granted, this was the weekend of the Oregon Brewer's Festival in Portland, but the problems the servers had seemed to go well beyond just being busy.  For one, they didn't seem to grasp the concept of tilting the glass while pouring a beer, to help reduce the amount of head on the beer.  Due to this, my 12oz Adam, which had a huge had on it, was really more like 8-9oz.  I wouldn't have minded so much, except that I saw other beers being served with no head and full to the rim (and others served with an even bigger head than mine).  It also seems they wasted a lot of beer this way, by letting so much if it go down the drain as foam.  I dreaded the moment later when I'd ask to have a growler filled with Adam (which took them 10+ minutes & several tries to get it full without leaving a massive amount of foam - which it started out with).

At one point, I saw a couple at the bar order two Blue Dot IPAs.  When the beers were placed in front of them, one had only about a 1/2" head on it, but the other one had a full 2" or more of head.  You'd think the bartender could make the effort to fill the glasses at least somewhat to the same level.  The couple, quite understandably, held up their glasses to each other and gave a funny look to the bartender - who said nothing.  This is not the way to serve.  I overheard customers all around the bar talking about the wildly uneven pours they were getting. 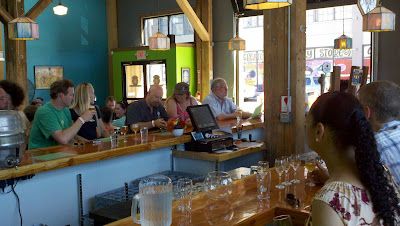 The Hair of the Dog bar - Not huge - So why was service lousy?
The bar staff was also horribly inattentive.  My wife & I were sitting right at the bar, but after I finished my Cherry Adam from the Wood, it took me a while (I'm talking 5-10 minutes) to get the attention of anyone behind the bar to order another drink.  It seems the staff pays great attention to those who just walk up to the bar to order, but tend to neglect those sitting right at the bar, who have been there for a while.  This seems rather backwards to me, as I usually have great service anywhere I go when I sit at the bar.  So, while I did enjoy myself at Hair of the Dog, the service made the experience less inviting than I had hoped.

Hopworks Urban Brewery:
Next up on the list (after a few other non-beer-related errands around Portland), was the Hopworks Urban Brewery.  Hopworks has two locations in Portland.  One of them is a 'Bike Bar', designed specifically for cyclists; the whole 'parking lot' is full of bike racks.  We went to the non-biker location, since we were in a car. 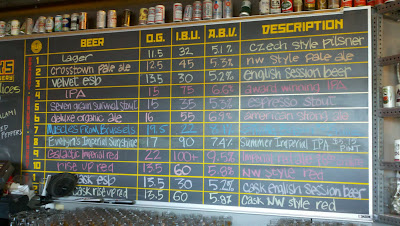 The Tap List at Hopworks
They had a large selection on tap, so it took me a few minutes to decide on what I wanted.  I eventually settled on their Cask ESB, which was a mild English style ESB, what they were calling a 'session' beer (5.8% alcohol).  It was quite tasty; I hadn't had a good ESB in a while.  I've been more of an IPA-head the past several years, but the ESB was a nice change of pace.

I also tried some tasters of their Galactic Imperial Red (seasonal: strong & big on hop flavor, with an IBU over 100), and Evelyn's Imperial Sunshine, their Summer Imperial IPA (which was also pretty good, with nice, floral hop aromas and a nice hop bite in the flavor).

The decor at Hopworks makes sense only if you know how big of a bicycle town Portland is.  The bar has bicycle frames mounted above it, serving as both decoration and a place for the light fixtures over the bar. 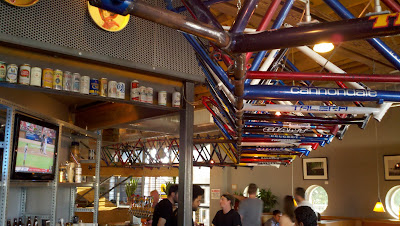 Bike Frames Over the Bar at Hopworks
This type of setup almost seemed to me like it would be more appropriate for a brewery with a name like, oh let's say, Flying Bike!  Ha ha!  The service at Hopworks was great.  My server was very attentive, and asked if I wanted another beer before my glass was empty.

Since the day was getting on and we had yet another brewery to visit before starting on the 2 1/2 - 3 hour drive back home, I only had the one ESB and two samplers at Hopworks before moving on to the next stop.  So I got a growler filled with Evelyn's Imperial Sunshine and was on my way.

Laurelwood Brewing Company has been around since 2001, but I only started seeing their beers around in Seattle area bars in the past couple of years.  I like what I've tried so far, and even voted for Laurelwood's Workhorse IPA in an IPA tasting challenge at Full Throttle Bottles earlier this year. 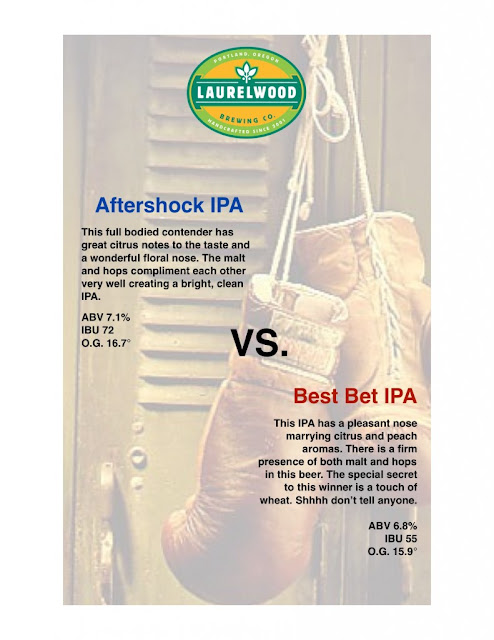 Laurelwood had an IPA Competition Going on
I noticed on my way in, that they had two special IPAs on tap in a head-to head competition: Aftershock IPA vs. Best Bet IPA.  I decided to give the Aftershock a try.  As described, it had a big, floral hop nose and citrusy hop flavors, with just enough malt character to balance things out.  Unfortunately, I didn't get around to trying the Best Bet IPA for comparison - maybe I'll have to go back again.  Oh darn! 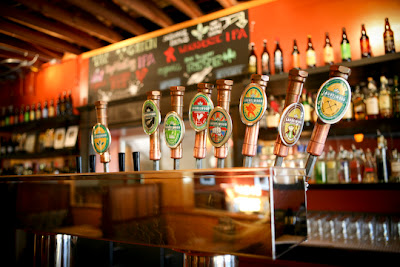 The Taps at Laurelwood
I was also getting just a bit hungry again by now, so I took at look at Laurelwood's menu.  The main menu entrees centered around choices like Space Stout Chicken, Pork Chops, the Laurelwood Burrito (Tex-Mex, style), Salmon, Ribs and other pub fare like pretzels & fondue, Hummus, Nachos, Mussels, etc. etc.  I wasn't hungry enough for a full meal, so I decided to order a bowl of their soup of the day, which was their take on New England Clam Chowder.

When my soup arrived, I was surprised to see my New England Clam Chowder was not white.  It had a darker, richer color and was quite thick.  I detected some smoky flavors as well as a generous portion of bacon crumbles, making it a very rich and flavorful chowder.  It was more that enough to fill me up.  I'll have to go back again and try some of their other menu choices.

The service at Laurelwood was excellent, even though they seemed extremely busy.  This, again, is when I believe sitting at the bar seems to pay off.  I was at the end of the bar close to one of the registers, so I never had to wait long for any service, and my glass was kept full.

After a full day in Portland, it was almost time to go.  By now it was around 8:30PM, so I knew we wouldn't get back home until close to midnight.  I filled the last growler I brought along with Laurelwood's Workhorse IPA, and then Lynn and I headed for the car to make our way back home.

The day trip was a great way to spend my birthday.  I had some good food, tasted some great beers and got to visit three more brewieries I'd never been to before - as well as one of my favorite German restaurants.  All in all, not a bad way to celebrate turning another year older.  Of course, I only scratched the surface of all the different breweries I could have visited in Portland, so this definitely won't be my last trip down there.

Drink responsibly and stay safe out there.
Posted by Beer Monger at 4:08 AM