Patience Is A Virtue

Back in April of this year in a post titled, "Patience & Planning Ahead", I posted about the necessity of patience in the brewing and fermentation process.  I think, with my latest batch of IPA, I have finally realized the true benefits of patience and planning.

Back in late June, I brewed an IPA for a competition.  The competiton is the Fly-PA IPA competition being put on by the Flying Bike Cooperative Brewery.  It's a cooperative members-only competiton to find Flying Bike's 'flagship' IPA beer.  The winner will have their beer scaled up and contract-brewed by Three Skulls Ales here in Seattle.  It's a rare opportunity for a homebrewer, like myself, to not only have their beer featured at a local pub, but to create what will be the first ever production beer created for the Flying Bike Cooperative Brewery; an important milestone for any brewery - or brewer.  I brewed a nice and hoppy Imperial IPA, with a final acohol level somewhere in range of 7-8 percent (7.75% ABV). 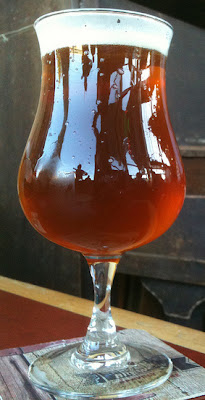 A Beautiful Imperial IPA
The Imperial IPA I brewed stayed nestled in it's primary fermenter at 68 degrees for a full three weeks before I moved it from the fermenter to a 5-gallon keg for conditioning.  I had intended to let the beer condition for just a week or two before dry-hopping it, but I got so busy and sidetracked that I didn't get around to dry-hopping it until about a week ago (August 17th); which means the beer was allowed to condition for about 4 1/2 weeks before being dry-hopped.  This was not a bad thing.

The beer was not carbonated during conditioning.  I only placed a gentle blanket of CO2 at 10PSI into the keg just after filling it, and then disconnected the CO2 line.  Two days after adding the hops (in a 'hop sock') to the keg, I began carbonation.

Last night, I got the first true taste of the finished beer - dry hopped an all.  I was very pleased.  I can honestly say that this may very well be the best IPA I have ever brewed.  It was also the first batch where my wife, Lynn, was my assistant brewer.  So it was a great milestone for her as well.

The aroma, appearance and flavor of my IIPA were all right where I wanted them to be.  I had to stop myself from going back for more.  I want to let the beer sit a few days longer, and then I'll bottle some this weekend for the competition.  After that, I can begin enjoying the rest for myself and bring some to a few friends for them to enjoy as well.

I used a brand new recipe, concocted from scratch by myself, for this batch.  It is definitely a recipe I'll have to try again.  I had originally planned to use Simcoe hops for this batch, but I was unable to find any, so I used a combination of different hops as a 'substitute'.  Now, I have my hands on some Simcoe from this year's crop, so I'll have to try the Simcoe version as well and see how it compares to what I've got now.

Drink responsibly and stay safe out there!
Posted by Beer Monger at 3:59 AM