My Trip To Scuttlebutt Brewing

As my regular readers know, in addition to being a beer enthusiast, I also enjoy motorcycle rides.  I often like to take a weekend ride out to one of the many breweries in the Puget Sound area and, this past weekend, that trip was to Scuttlebutt Brewing in Everett, WA.

I normally look for a more 'roundabout' way to get to the breweries I'm visiting, since I'm on my motorcycle, but I got a bit of a late start on Saturday, so I took I5 from Federal Way, where I live, to the Everett waterfront.  Scuttlebutt recently moved a bit down the block from where the used to be - and a bit closer to the water.  They now share a building and parking lot with the Everett Waterfront Center; a beautiful space right on the Everett Marina.

Usually, when I first walk into a brewery restaurant, I look for the bar.  I've always been the type of person who prefers sitting at the bar in a bar or restaurant unless, of course, it's more than just me or me and one other person.  At first, I saw no bar.  I walked into the restaurant, past the podium near the front doors, but still didn't see the bar.  It wasn't until I was a ways into the restaurant that I finally saw the bar.  It was situated in such a way that it couldn't be seen from the front door.  The bar itself was well laid out; not too cluttered and a nice bar top. 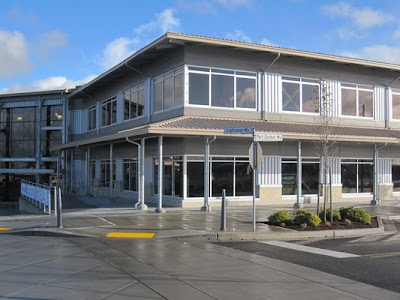 Scuttlebutt Brewing Co.
The view from the dining room, and for the bartender, was great.  Being right on the water provides a nice view of the marina, and all the boats moored there.  It just seemed a bit unfortunate, however, that the bar was situated so that the bartender, rather than the patrons at the bar, had the view.  This could explain why, when I went to sit at the bar, I was the only one there.  Everyone else was at a table, which provided a better view.  The only company I got at the bar during the few hours I was there, other than the bartender, was the occasional couple waiting for a table by the window, or those coming in to have growlers filled (and it was a popular day for that!)  Perhaps a mirror behind the bar could help alleviate this issue.

I started with Scuttlebutt's dry-hopped IPA.  A solid beer, but it was served a bit too cold for my taste.  It was also served in a chilled/frosted pint glass, which I'm not a fan of.  The IPA was so cold that I wasn't really able to detect much of any hop aroma.  I had to wait a bit for the beer to warm up before I could really smell the hop character.  When I mentioned this to the bartender, he actually said the brewer didn't like the fact that they were serving the beer in frosted glasses.  You'd think a brewery restaurant would take the advice of their brewer in this regard, so the brews are presented properly; in a way that lets all of the flavor and aroma come through. 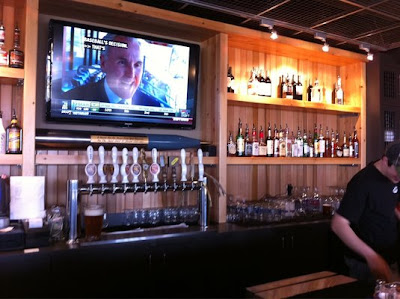 The Bar At Scuttlebutt
The menu at Scuttlebutt is a good mix of seafood, steaks, chicken, appetizers, soups, salads and the like, with a pretty good overall selection.  Trying to eat a bit healthier these days, I opted for the Alaskan Cod sandwich.  I almost got the fish tacos but the menu said they were fried.  I found out later I could have ordered the fish tacos grilled instead of fried - so maybe next time.  The Alaskan Cod sandwich was very good.  The fish was fresh, firm and cooked just right, and bun was soft.  I paired my sandwich with Scuttlebutt's standard clam chowder, which was pretty good.

By this time, I was ready for another beer, so I tried Scuttlebutt's 10° Below - an imperial dunkelweiss.  Medium/dark brown in color with a thin tan head and medium body, it was a pretty good dunkelweiss with some caramel malt aromas and plum/raisin notes.  A good beer, but not a 'standout' beer; though I'd order one again.

My last beer before hitting the road was a bottle of Scuttlebutt's 2008 'Old No. 1' Barleywine.  It came across as more of an English style barleywine, with a nice malt body, but was a bit hoppy for an English style.  Since I'm quite a hop-head, however, this was not an issue for me.  Though I'd never had a Scuttlebutt barleywine before, I could tell immediately that the beer had benefited from 3+ years of aging, adding to the complexity of the malt character.  It was quite tasty.

Overall, Scuttlebutt is a very nice place.  It has a welcoming atmosphere, though it feels a bit more like a restaurant with a bar than a brewery with a restaurant, if you know what I mean.  The menu had some nice variety and the little bit of it I got to try on my visit was very good.  There are few things I'd change, such as use of frosted pint glasses to better present the beers, and it would have been nice if they could have situated things to give bar patrons a better view, but overall it was a pleasant experience, and a place I'd reccommend if you're in the Everett area.

Drink responsibly and stay safe out there.
Posted by Beer Monger at 2:57 AM