No One Can Pick Just One (Volume 1)

Welcome to the first in a series of articles, where I will search my soul to share with you some of my favorite brews.  Every few months, there will be another volume, where I'll keep adding to the list of my all-time favorite beers. 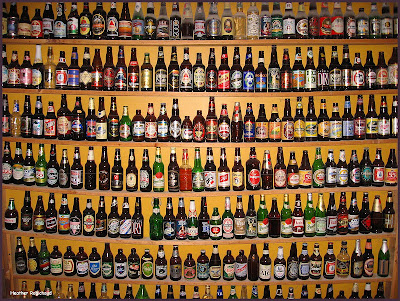 Really?  Do I have to pick just one?  I mean, isn't one of the joys of craft beer the fact that there are so many choices? It would be a pretty boring World if you were only able to select a single beer to drink for the rest of your life.  Most people I know have an extremely difficult, if not impossible time answering this question.

I know, I know.  Some people aspire to just that: finding the one beer they consider barley & hop Nirvana, and then never stray.  Unfortunately, most of the beer drinkers I know with this mentality are those who drink Bud, Coors, Pabst or another similarly watered-down, mass-produced American lager.  A couple of weeks ago, while at the Dog & Pony Alehouse in Renton, WA, I saw one of the 'regulars' come in.  His usual oder is Pabst Blue Ribbon on tap, but they had run out or were having a problem with the Pabst tap that day.  He sat there, looking at the menu and tap handles (which included plenty of beers from breweries such as Stone, Fremont, Firestone Walker, Deschutes, Odin, Laurelwood, etc. etc.), for nearly 5 minutes before deciding that he'd have to settle for a can of Ranier Beer.

That's definitely not me.  While I do have a favorite beer style (IPA - though Pale Ale, Stout, Barleywine, etc. are all a close 2nd), I couldn't stand being limited to just a single beer or even just a single brewery.  I have occasional favorite beers, but the answer is always changing because I'm always on the hunt for new beers and breweries to try.  With all this in mind, however, the question has gotten me thinking about what some of my favorite beers are.  What are the ones I've had over the years that really stick in my mind as what I might call 'favorites'? Let's see what comes to mind.

Volume 1 Of a series.

Mendocino Brewing Red Tail Ale:
This was the first 'microbrew' I ever had; and to this day, it's still a great beer.  I really need to pick some up; it's been a while.  There are lots of other Mendocino Brewing Comapny beers I enjoy as well, but we'll get into those in future volumes of 'No One Can Pick Just One'.  LINK

Sierra Nevada Pale Ale:
For years, many homebrewers I know used this beer as the 'yardstick' to measure their pales against.  I don't drink it as much these days, because I'm more of an IPA fan than straight Pales.  There are, however, many other Sierra Nevada beers I enjoy.  LINK

Anderson Valley Boont Amber Ale:
Shortly after I first discovered microbrew in the late 80's, I discovered Anderson Valley Brewing Company.  And since I already spent a lot of time up in Sonoma and Mendocino counties, I thought I'd take a trip to Bonnville to check them out.  Their almost honey-sweet Boont Amber has always been one of my favorite beers.  Their Hop Ottin IPA ain't bad either or their....well, you'll have to wait for the next volume!  LINK

Deschutes Jubelale:
This was one of the first special holiday ales I ever tried, and I was instantly hooked.  This one is usually pretty easy to find too, as Deschutes' distributing has them in many supermarkets these days.  When Summer is over, give it a try!  LINK

Lagunitas Brewing Hop Stoopid:
This is a great beer when you're ready for a hop slap in the face.  As a true 'hop head', I Love it.  Though, I'll be honest, I haven't found a beer from Lagunitas I don't like yet!  As favorite breweries go, Lagunitas is definitely on my list.  Watch for many more of their beers in future volumes.  I'm hoping to pay a visit to Lagunitas brewing this December during a trip I'll me making through California on my way to Las Vegas for New Years - the same trip where I hope to visit Marin Brewing.  LINK

Stone Brewing Arrogant Bastard:
You've gotta Love a beer with an attitude.  This rich, complex, dark ale tells you right on the bottle: "This is an aggressive ale. You probably won’t like it. It is quite doubtful that you have the taste or sophistication to be able to appreciate an ale of this quality and depth."  Arrogant Bastard is also released in several different 'versions', including: Oaked Arrogant Bastard Ale, Double Bastard Ale and Lucky Bastard Ale.  You're not worthy!  LINK

Firestone Walker Double Jack:
As my regular readers know, I'm a big IPA fan.  I Love standard IPAs, Imperial IPAs even more and the hoppier the better.  Sometimes I like an IPA to just slap me in the face with hops.  Other times, I prefer a more balanced IPA, where the malt character in the beer is well balanced with the hop bitterness, flavor and aroma.  And, in my opinion, Double Jack the master of the balanced IPA.  It's one of the most well balanced Imperial IPAs I've ever had.  I enjoy their Union Jack IPA as well, but the Imperial Double Jack is currently my favorite 'every day' beer.  There are several other Firestone Walker beers that I absolutely Love (Abacus, Parabola, 14th Anniversary, etc. etc.), but I'll cover those in a future volume of 'No One Can Pick Just One'.  LINK

For any beers or breweries I've left off this list, don't worry!  This article is the just first in a series, as I mentioned above.

Drink responsibly and stay safe out there.
Posted by Beer Monger at 1:28 AM