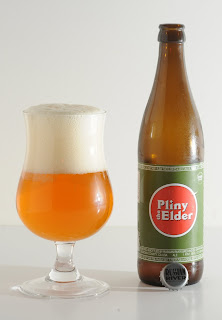 I recently detailed in my post: Pliny The MADNESS! about how I don't 'chase' Pliny. Let me remind you of what I'd said:

"Now, I can appreciate a well made Imperial IPA as much as the next person; perhaps even more. However, I think that the lengths some people are going to in order to get their hands on a pint or bottle of Pliny is a bit over the top. Is it an excellent beer? Without a doubt. But in your mad dash towards a Pliny, don't overlook all the other amazing beers that are also likely staring you right in the face. "

So, like I said, it's an excellent beer, I just don't go out of my way to find it. This time, however, it found ME!
While having a Scarlett Fire IPA after work yesterday at Big Time Brewing Company, I was checking Twitter on my phone and saw that Bottleworks had just made a post saying they'd gotten some Pliny in (they didn't specify if it was Elder or Younger). I was already getting ready to leave Big Time and Bottleworks is only about 5-6 minutes away, so I figured I'd go grab some on my way home.

I walked in the door to Bottleworks, and about 20-30 bottles of Pliny The Elder were sitting on the counter, right by checkout. I took my time, grabbed a few other bottles and looked around a bit (I don't get to Bottleworks nearly as often as I get to 99 Bottles). When I got to checkout I asked what the bottle limit was on Pliny. I was expecting an answer of 1-2 bottles per person, which is not uncommon for a beer that's so often in demand. I was surprised when the clerk told me the limit was 6 bottles per person! I'm sure it all went fast.
Not wanting to be greedy, and knowing I'd directed others to Bottleworks that day after seeing their Twitter post, I only grabbed 4 bottles along with my other choices.
Now, since we've already established that Pliny The Elder is a top, World Class beer, I'm not going to painstakingly break down my tasting notes for it as I would for most of my beer reviews. I've had Pliny before and I'll have it again. Suffice it to say that if you find it and haven't tried it before, grab a pint/bottle. If you'd like some in -depth reviews, there are plenty to be seen over at Beer Advocate.

I only had one bottle of the Pliny last night, so I have another to savor when the mood strikes (the other two are for my wife, who also appreciates good beer). Until then, I'll just have to see what else I can find - and look forward to Brouwer's Hard Liver Fest this weekend.

Drink responsibly and stay safe out there!
Posted by Beer Monger at 6:26 AM