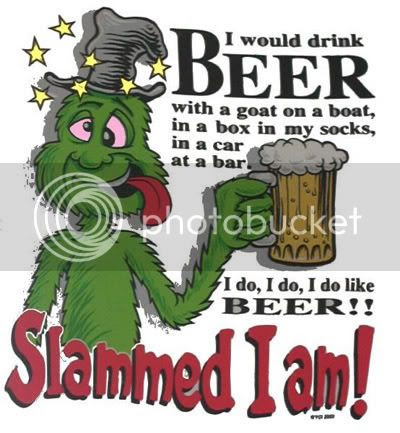 If Dr. Seuss was a heavy drinker... lol
Seriously though (and it's really sad that I have to actually say this in this day & age), please understand this is parody. NEVER drink beer in a car or drive drunk - and I don't advocate getting 'slammed' either. Yes, I enjoy a good beer buzz, but a responsible drinker knows when they've had enough, and especially when to NEVER get behind the wheel. If you want to drink beer in a box in your socks, however, that's up to you.
Please excuse my absence the past few days, but I've been a bit sidetracked with a pesky little thing called 'real life'. It can get so annoying at times! But I'm back and ready for more new beer experiences.
First a few general updates:
BJCP:
I've been 'browsing' my BJCP Study Guide, but beginning this weekend, I plan to dive in head first. Read through the entire study guide and further investigate the first steps I need to get my BJCP Certification.
Seattle Beer Scene:
There have been a lot of changes recently in the Seattle beer scene. We got a few new breweries in town last year (including Epic Ales, Emererald City Beer Company (Which opened up shop in a portion of the Old Ranier Brewery, whose current primary occupant is Tully's Coffee), Northwest Peaks Brewery and more. All in all, there were 12 new brewery license applications in the Seattle/Puget Sound area in 2010.
There were also some big personnel changes. Jeanelle Pritchard resigned from Trade Route Brewing and Chris Miller resigned from Snipes Mountain for a new opportunity in California.
Also, in a change that affects me personally, since this is one of my regular haunts, Bill Jenkins is leaving as head brewer of Big Time Brewing Company in Seattle's University District. Bill has been at Big Time for years, making truly world-class beers (as well as a few 'experiements', some amazing, some disappointing). If Bill has to go, however, what better replacement than his brewing brother (in law), Drew Cluley! Drew has been the head brewer at Pike Brewing Company for several years, but he is leaving The Pike to replace Bill as the new brewer at Big Time.
Seattle Beer Week:
Yeah, yeah. I know it's still two months away. I just want to make sure you're all keeping it on your radar! Let me just give you their website for now: SeattleBeerWeek.com Maritime Pacific Brewing Company will be brewing this year's Official Seattle Week Beer.
Tonight on my way home, I'll be making a trip to my local bottle shop, 99 Bottles. I will, of course, pick up a few favorites, but I'm also planning to grab a few new beers, so I can continue to improve my tasting abilities, and provide all of you with more in-depth beer reviews.
Please make sure you also LIKE our facebook page! Thanks!
Drink responsibly and stay safe out there!