My First Batch of the Season 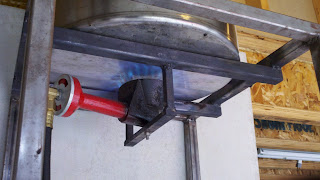 Water Being Heated in the Hot Liquor Tank
PLEASE NOTE - MORE PHOTOS FROM THIS BREW SESSION HAVE BEEN ADDED. PLEASE 'LIKE' US ON FACEBOOK TO SEE THE REST OF THE PHOTOS!
Yesterday, for the first time in a few years, I finally brewed again! This will be my first batch of many to come this year.

Overall, things went pretty smoothly. My only mistake was underestimating how much water I needed to use for sparging. I used 8 gallons to sparge, but I should have used 9-10. Don’t know what sparging is? I’ll get into that below. I also think I lost a bit more due to evaporation during the boil than I’d anticipated. As a result, the batch came out to be just about or slightly less than 9 gallons. I’m OK with that though. The whole brewing process went pretty smoothly, and in 4 weeks time I’ll have a nice, tasty batch of IPA ready to go!

I took a few photos as I was brewing, as well as a video. I’ll share the photos here as I go over the brewing process. The video will be posted as soon as I can find the time to edit it all together.
The Brewing Process:
Step 1: Relax. Don’t worry. Have a beer.
This is a saying I basically stole from Charlie Papazian, homebrewing pioneer and author of, “The New Complete Joy of Homebrewing.” The actual saying is: Relax. Don’t Worry. Have a homebrew. However, since I haven’t homebrewed in a while, I didn’t have any available to drink. 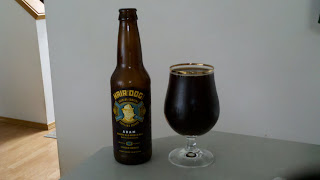 My Selection For Today's Step 1

The Brewing Process:
Step 2: The mash.
Beer is made from grains, water, hops and yeast. The first step involves cracking open your grains and then adding hot water to starting the mash. After the grains are cracked open using a grain mill (you want to crack the grain husks open, not crush the grain), hot water is added to the mash from the ‘Hot Liquor Tank’ (basically, a big kettle for heating up the water for mashing and sparging). The idea is to hold the grains at a temperature range of about 150-155 degrees. It is at this temperature that the ‘mash’ happens. That is, the starches in the grains are converted into sugars.

Grains to Add to the Mash
Yeast uses sugar and oxygen in order to create alcohol and CO2 (carbon dioxide) so this is, obviously, a very crucial step in the brewing process. You have to account for the temperature drop that will happen when the hot water is added to the room-temperature grains in the mash tun. To hit my target mash temperature of 150-155 degrees, I usually start with 170 degree water in the hot liquor tank. I also use a 10-gallon drink cooler as my mash tun, to help the grains remain in the target temperature range. 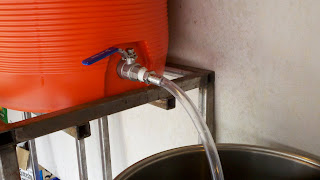 The Spiggot On My Mash Tun - To Allow the Wort to Flow into the Boil Kettle
The Brewing Process:
Step 3: The Sparge.
After the mash is complete, it’s time to sparge. Sparging is the process of spraying water over the grain in the mash tun in order to wash all the sugar from the mashed grain into the boil kettle. In my brewing setup I currently use a spinning sparging arm (called Phil’s Sparger – no longer made). This sits atop the mash tun and rotates while slowly and gently spraying the grains with hot water. 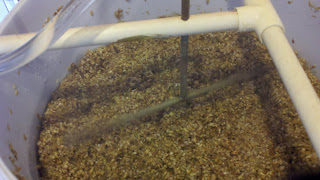 The Sparge Arm; Spinning to Gently Shower the Grains With Water From the Hot Liquor Tank 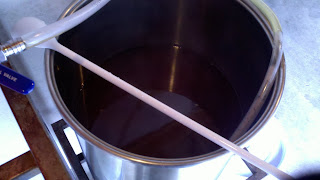 Wort Flowing Very Slowly From the Mash Tun into the Boil Kettle
The Brewing Process:
Step 3: The Boil.
Once the sparge was complete and the wort was in the boil kettle, it was time to boil. I lit the burner under my boil kettle when the sparge was nearly complete and brought my wort slowly up to a boil. It’s important to bring your wort to a boil slowly to help avoid the possibility of a boil over (which can be a nasty, sticky mess!)

As soon as the wort reached a boil, it was time to add the first bittering hops and start the clock. The length of the boil can differ depending on the style of beer being made, but the average is right around one hour (which was the boil time for this particular batch). For the next half hour, I monitored the boil kettle; making sure the boil kept rolling but was not in danger of boiling over and gave the kettle an occasional stir.

A half hour in, or halfway through the boil, I added the second batch of bittering hops and kept monitoring the boil. I also got my wort chiller ready and started preparing my fermentation tanks.

The Brewing Process:
Step 4: Finishing Hops and the Cool Down.
When there was 5 minutes left on the clock for the boil, it was time to add the finishing hops. The hops added earlier in the boil were for bittering (imparting that familiar bitter bite to IPA beers). Finishing hops don’t add much bitterness, but affect the ‘nose’ of the finished beer; giving it that nice, floral hop aroma.

As soon as the boil clock reached 60 minutes, I turned off the burner and turned on the hose faucet, to allow cold water to start flowing through the wort chiller. You want to get your wort down to the proper temperature (in this case 68-70 degrees) as soon as possible.

The Brewing Process:
Step 5: Transferring to Fermenters and Pitching the Yeast.
The wort took about 10 minutes or so to go from boiling to about 68-70 degrees. Once the target temperature was achieved, I turned off the hose feeding the wort chiller and grabbed the first of my two carboys.

Unfortunately, I don’t currently own a fermentation tank large enough to ferment whole 10-gallon batches. So, I just use 2 6 ½ gallon carboys and put half the batch in each. (See my previous post regarding my ‘dream fermeter’).

As I said at the start of this article, I think my only error was not adding enough water to the hot liquor tank for the sparge. I ran out just a bit early, so I wasn’t able to collect a full 12-12.5 gallons of wort. I got a little less than 11 gallons. The rest was lost to evaporation during the boil.

Once the wort had been transferred from the boil kettle to both fermenters, it was time to pitch the yeast. You want to pitch (add) the yeast at the proper target temperature of 68-70 degrees. After adding the yeast, the fermenters get agitated (Shaken) for about 5 minutes. This shaking is to oxygenate the wort, since the yeast uses sugar and oxygen as its ‘food’ to produce alcohol and CO2.

Now we wait. After one week in the primary fermentation tanks, it will be time to transfer the beer to the secondary fermenter. This is done to get the beer off the trub (pronounced – troob), the layer of spent yeast that collects at the bottom of the fermentation tank. Once the beer is in the secondary fermenters, I will be ‘dry hopping’ it. Dry hopping is the practice of adding hops directly to the fermenter, in order to add more hop aroma and flavor to the finished beer.

After one more week in the secondary fermenters it’s time to either keg or bottle our beer. I usually do half and half (keg half and bottle half). Having my batch split into two separate fermenters makes this quite easy to accomplish.

I did manage to take a good amount of video as I was brewing this batch. I’ll get the video edited and posted up for you all to see as soon as I can.

Drink responsibly and stay safe out there.
Posted by Beer Monger at 9:02 AM