Benefit For Victims Of The Cafe Racer Tragedy

As I'm sure you're aware, tragedy struck Seattle last week when five innocent people were gunned down by shooter Ian Stanwicki.  A sixth victim is still in critical condition at Harborview Medical Center.

Stanwicki's rampage began at Seattle's quirky Cafe Racer in Seattle's University District where most of his victims where shot.  Since the shooting, the Cafe has become a memorial of sorts, with lots of flowers and cards out front as remembrance for friend's and family senslessly lost. 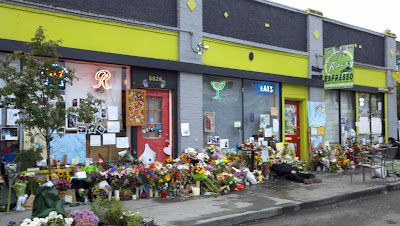 The Memorial In Front Of Cafe Racer This Morning

To assist the victim's families of this horrible event, Latona Pub will be holding a benefit this Thusrday, June 7th.  A keg of 'Racer 5 IPA' will be on tap, and all proceeds will benefit the victim's families.  So be sure to drop by the Latona on the 7th to raise a pint in honor of those we have lost.  It's sure to be an emotional evening; hopefully an evning that can allow the healing to begin.

Drink responsibly and stay safe out there.
Posted by Beer Monger at 3:10 AM