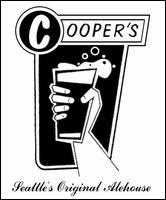 ﻿
Each year, Cooper's Alehouse up on Lake City Way holds an IPA Fest, featuring a wide range of different IPA's from around the Northwest and the country.  This year, from April 6th through the 27th will be their 10th annual IPA fest.  As a serious hop-head, my taste buds are tingling in anticipation.

There will be over 50+ different IPA's pouring throughout the fest, with samplers, tastings and special events all month long.  No precise schedule for when each beer will be tapped has been provided by Cooper's, but this is intentional.  In most cases, when it's announced beforehand that a coveted or 'rare' beer is going on tap, it tends to disappear more quickly than if you just happen to 'find' it on tap.  Cooper's doesn't want that to happen, so if you're looking for a particularly coveted or rare IPA, you'll just have to decide what day(s) and time(s) to head down to Cooper's and see if you get lucky.

It's really great 10 years for craft beer, and we've seen several other wonderful Seattle craft beer events and new breweries pop up in that time.  The ever-increasing options for where to go in Seattle for great caft beer continues even today, as evidenced by the opening later today of Seattle's newest, World-class craft beer bar The Pine Box (opening to the public today at 3:00PM).  I attended the pre-opening industry party for The Pine Box on Tuesday, and you can check out a recap of the evening, my impression of The Pine Box and their industry night food menu and tap list HERE.

The full tap list for the fest has not yet been announced, but I will update this post as soon as Cooper's releases it (sometime next week, according to Cooper's).  Until then enjoy the cold start to our Sping, but warm up your taste buds for some serious hops!  For a look at last year's full IPA Fest tap list, have a look HERE.