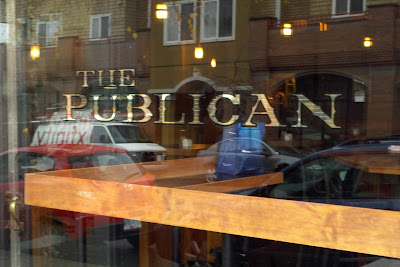 Seattle's newest bar, The Publican (their website will be up soon), which is brought to you by the same people who helped create Brouwer's Cafe and Bottleworks, opened for business yesterday 12/28 at 10:00AM in Seattle's Tangletown neighborhood.  I managed to get down there after I was off work to check the place out and relax with a few beers and a bite to eat.

The Publican has 22 taps, which primarily feature American craft microbrews.  They also have a large selection of cans, rather than bottles, as the can revolution seems to be taking hold in the craft beer industry (Personally, I prefer bottles to cans, but that's another discussion).  They also feature an impressive selection of liquor, including several bourbons, Scotches and over 35 different tequilas, for patrons who might be missing Bandolero, the establishment that preceded The Publican at the same location. 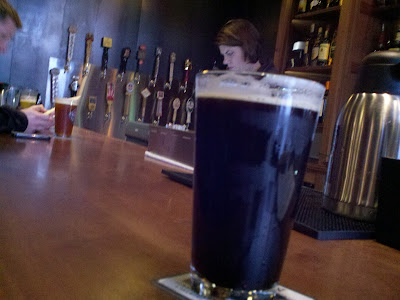 The View From My Barstool At The Publican
While there, I ran into Matt Bonney of Brouwer's Cafe, who has been working hard to get The Publican ready to open.  He was talking to the patrons, making sure everything was feeling right and tasting good since, of course, this was their opening day.  We chatted for a few minutes, and I congratulated him on the opening, which seemed to be getting off to a great start.

The menu at The Publican is impressive, and even more extensive than the menu at Brouwer's Cafe (see the full bar & food menus below).  With a fulll, served-all-day breakfast menu, as well as favorites like Chicken & Waffles, Omelets and much more, most everyone can find something they'll enjoy. 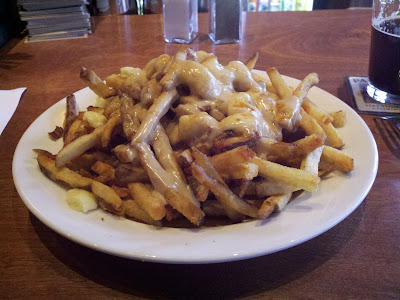 A BIG Order Of REAL Poutine - With Wisconsin Cheddar Cheese Curds.  Yum!
I wasn't extremely hungry, so I decided on an appetizer order of Poutine.  For those of you unfamiliar with Poutine, it is a Canadian dish of French fries and fresh cheese curds, covered with a brown gravy or other sauce.  Many places, including a few food trucks around Seattle, attempt to make a good poutine, but their biggest mistake is using just regular old cheese instead of cheese curds.  The Publican does it right, with real Wisconsin cheddar cheese curds, a beer cheese sauce and a veal demi-glace.

As you can see from the photo above, however, my poutine 'Appetizer' was easily enough for 2-3 people to share.  So, of course, I wound up bringing a good portion of it home as leftovers.  The portions are not skimpy.  I also decided to try something I haven't had in a while and that you don't often see on many bar menus: a Scotch Egg.  This is a hard-boiled egg, soaked in Scotch, wrapped in sausage, then breaded and deep fried.  Unfortunately, I neglected to grab a photo of my beautifully presented Scotch Egg, so I guess you'll just have to get down to The Publican and order one for yourself.  They are sinfully decadent.

The Publican opens daily at 10:00AM.  The kitchen is open until 10:00PM and the bar until midnight.  They are a 21 and over establishment (children are not allowed).  I want to have a go at the breakfast menu, so I'll probably be back at The Publican again this Friday.  The Publican's website is not quite up yet, so below you can see their full bar and food menus: 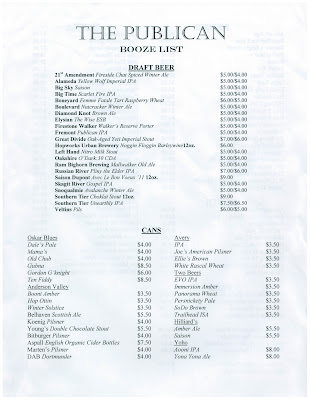 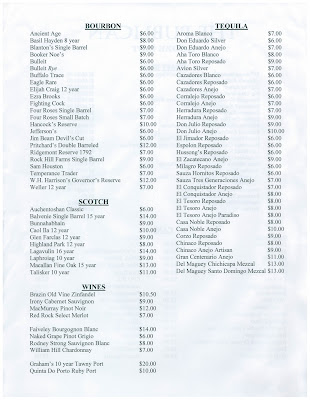 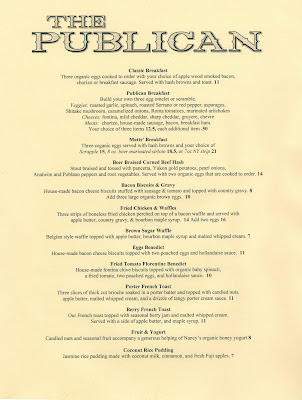 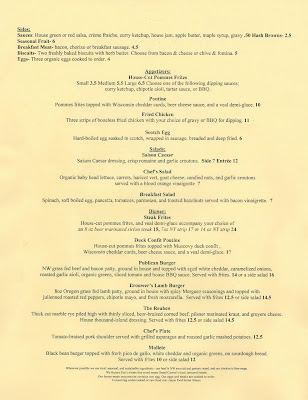 (Click for larger version)
Drink responsibly and stay safe out there.
Posted by Beer Monger at 3:57 AM