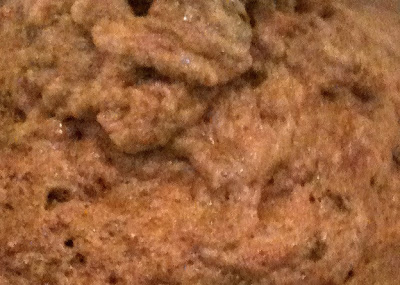 Yeast is the smallest ingredient in beer brewing; in fact it's microscopic.  But yeast is the crucial ingredient that gives us all of our wonderful brews.  Without yeast, there would be no beer.  So raise your glass and thank God for yeast!

Yeast is a living thing.  It's a micro-organism whose function in brewing is to consume sugar and oxygen, and produce carbon dioxide and alcohol.  What a wonderful little organism, isn't it?  As a living micro-organism, however, it will eat and interact with whatever you provide it.  This is why sanitization is so important in brewing.  Introduce a yeast to a wort or some brewing equipment that is unsanitary, and you risk introducing any number of undesirable micro-organisms into your beer.

Don't worry.  It's not possible to produce any pathogens from brewing.  There's nothing that will kill you or make you horribly ill or anything like that.  If an unwanted organism does make it into your beer, however, it can infect the beer and definitely impart some off flavors, smells, aftertastes, etc.  An infected beer is never a good thing.

Sanitization & The Boil:
When brewing, you always want to use clean equipment.  I always clean and sanitize nearly everything my beer or any of its ingredients will touch.  Before reaching the boil kettle, however, full sanitization is less crucial.  Sure, you want everything to be clean and sanitary, but it's less important before the boil than after it.  That is, of course, because boiling your wort for approximately and hour would definitely kill any micro-organisms that might have found their way into your beer before it reached the boil kettle.

After the boil is when proper sanitization becomes crucial.  Once your finished wort drops below boiling temperature, it becomes susceptible to infection.  If you allow the wort to come into contact with anything dirty or unsanitary, it has a chance of picking up something unwanted.  That is why it's important to keep the boil kettle closed while cooling the wort after the boil, and why you want to get the wort cooled and into an airlocked fermeter as soon as possible after the boil is complete.

I Use 'Star San' Sanitizer To Sanitize My Brewing Equipment
Later, when you move your beer to a secondary fermenter, to a keg or if you bottle it, you must continue to make sure that anything that touches your beer is clean and sanitized.  Even though your beer may be finished fermenting, the yeast is still alive.  It's merely gone dormant after consuming all the available sugar and oxygen, but it can 'wake up' again if it finds a new micro-organism to interact with.

One Piece of Faulty Equipment:
In my previous post, I was discussing the importance of patience in brewing.  I was becoming unhappy with the first batch of IPA I'd brewed this year, because it seemed to be a very mediocre beer, and I had been blaming my impatience in rushing the beer into the keg and into the glass.  I still maintain that patience in brewing is important and that I absolutely did rush that batch of IPA, but I discovered last night that was not the reason the beer was not as good as it could have been - and actually seemed to be getting worse over time.

I was adjusting a few things in my fridge last night when I made a shocking discovery.  The bottom of my fridge was a bit wet and rather sticky.  Closer inspection revealed a slow leak around the liquid-out fitting on the keg I had been serving from.  The ball-lock fitting for the liquid out connection wasn't sealing securely and I had, apparently, had a leak from the keg. 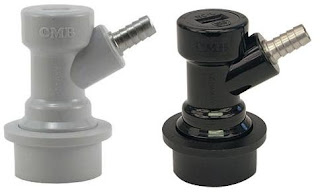 Ball-Lock Fittings (Grey = Gas | Black = Liquid)
Thankfully the leak was very slow and not serious enough to flood the fridge with beer or drain my newly-exchanged CO2 tank.  However, it seems that the leak in the connection was just enough to allow the beer in that keg to pick up an infection.  The ball lock fitting had a thin layer of yeast crusted around the edges, and I found the same sticky, yeasty liquid leaked liquid all around the fitting and even down the side of and under the keg.  Clearly, whatever had infected the crusty yeast on the keg had also gotten inside and spoiled the beer.

I decided to dump the keg.  Why keep a beer around that doesn't taste good? Drinking homebrewed beer is supposed to be an enjoyable experience, not something that becomes work or a chore to be checked off.  That's no fun.  And since this beer seemed to be getting even worse, not better, I saw no reason to save it.  Who wants to drink an infected beer?

Well, last night after pulling the bad keg from the fridge and dumping it, I went to try a beer from the 4 gallon keg.  I was fully expecting the possibility that this keg either had an infection as well, or still suffered other detrimental flavor effects due to my impatience.  I crossed my fingers and grabbed a glass.

Immediately after tapping off the beer I brought it to my nose and was very pleasantly surprised by an instantly citrusy, hoppy nose, with some subdued caramel malt aromas in the background.  I took a sip.  Amazing!  Despite my impatience early on in the fermentation and kegging process, allowing this keg to sit for a couple of weeks before tapping it really made a difference.  Sure, it still had a bit of haze to it, but even that was not as bad as the beer from the first keg.  This was a beer I wanted to drink; a beer that I would be proud serving to my friends and family.  Thankfully, the problem with the one leaky keg had not been transferred to this keg.  But it was a great learning experience about how easily beer can become infected and how important it is to always check your equipment for leaks or other faults.

Drink responsibly and stay safe out there!
Posted by Beer Monger at 8:22 AM