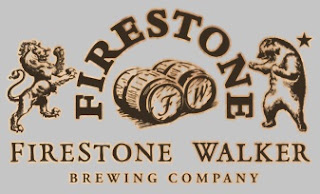 
Red Nectar Ale was supposed to be on the lineup as well, but the keg was 'missing' from the K&L truck.  At least that's all that was missing though.  The rest were tapped with dispatch and the taps began flowing.

From the list above, the only three beers I hadn't had before were the Reginald Brett, Firestone Walker's first sour (unless you count the extremely rare appearances of Firestone Walker's SLO-Ambic and Agrestic Ale, which have only shown up at a few special events), the Pivo Pilsner and Double DBA.  So those are the three I was eager to sample.

I can understand slightly higher prices for some beers, especially if they are more 'rare' or carry a higher cost per keg from the distributor, but $11 for a 12oz pour is about the highest I've ever seen.  Even an appearance of Firestone Walker's 'Sticky Monkey' (an extremely rare FW beer that's not usually sold on its own and is brewed as a blending component for many other FW beers) at one of my regular spots last week was only $10 for a 12oz pour.

Though a few prices seemed high, it didn't bother me too much, until I later found out that full 9.5% tax was added afterwards.  That seemed unusual to me.  At nearly every craft beer spot I frequent, the necessary taxes are already included in the draft prices.  For example, if I order a pint that's listed at $5.  My bill will be $5; not $5.48 ($5 + 9.5% tax).  I only expect to see tax on food items.  So that 12oz pour of Reginald Brett for $11 was really $12.05 once tax was added.  Now that's just outrageous and, in my opinion, rather greedy.

The same was true at another establishment I also recently visited.  My wife and I went for a couple of beers and a light snack.  The total bill for four beers (at prices ranging from $4 to $6) and $6 for food was $27.  This place didn't even charge tax for the food!  It was already included in the listed prices.

Later on, I went on Facebook to express my disappointment to UFPH over their pricing scheme.  Their response was to delete my post from their page.  That really annoyed me.  Were they trying to 'hide' unfavorable information and opinions from the public?  I posted agian, telling them I was unhappy that they had removed my post.  Their response was to delete this post as well, and then ban me from being able to post on their Facbook wall at all.  I believe they replied to my 2nd post before deleting it, but I had no idea what they said because, once they had deleted my post, I had no way to see their response.  I found this to be extremely un-professional and extremely rude.

Later that evening, I received an email from UFPH, saying they had deleted my first post because I had implied they were doing something illegal.  This is not so.  Granted, I had not yet educated myself regarding exactly how beer taxes work in WA (I have since done so - I read up on WA liquor & beer tax law last night after this experience), so I asked them on their page if it was legal to add sales tax (at 9.5%) on top of the listed draft prices.  Again, I asked.  I never stated or tried to imply they were doing anything illegal.  It was a legitimate inquiry to something I hadn't yet looked up myself.  They could have easily just replied to my post and explained, rather than simply deleting what I'd said.  I guess I'll have to be a bit more tactful in the future.

My second post, where I expressed my displeasure in having my first post deleted, did not mention legal issues in any way.  In addition to voicing my displeasure over having the post deleted, I told them I was disappointed with their $11 price for a few of the beers on tap and the fact that they were adding full sales tax on top of their listed draft prices.  So there was no reason to delete that post and certainly no reason to take the additional and extraordinary step of banning me from their Facebook page.  At that point, I felt certain they were deliberately trying to conceal 'unflattering' pricing information from the public eye.

Suffice it to say, I was not impressed with Urban Family Public House, and I doubt I'll be back anytime soon.  They certainly aren't the only place in town to get some great Firestone Walker beers.

Drink responsibly and stay safe out there.
Posted by Beer Monger at 3:37 AM