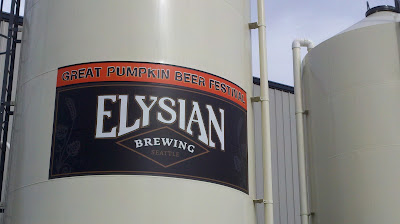 Today, my wife and I attended day 1 of the 7th Annual Great Pumpkin Beer Festival at Elysian Brewing's impressive new Georgetown brewing facility.  We were preparing for grey skies and the possibility of rain, but instead found a beautiful, sunny day where a huge crowd enjoyed a wide variety of pumpkin-influenced beers from both local breweries and from breweries across the country. 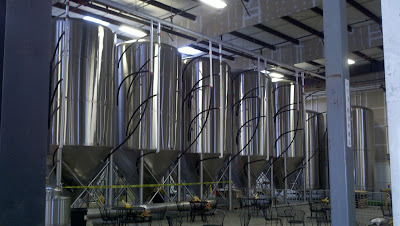 A few of the tanks at Elysian's impressive new brewing facility in Georgetown
Food at the festival was provided by mobile food vendors: Where Ya At Matt, Snout & Co. and Skillet.  To satiate our sweet tooth, we had Bluebird Ice Cream (and yes, they had a few different varieties of pumpkin beer ice cream!) and Mighty O Donuts.  Yum, yum!

Having pre-paid tickets for this event wound up being a real advantage.  Pre-sale ticket holders were allowed in just after 11:30AM, while those purchasing tickets at the door had to wait until noon before they were allowed to start tricking in.  Even by about 6:00 when we left for the day, there was still quite a long line of people waiting to get in. 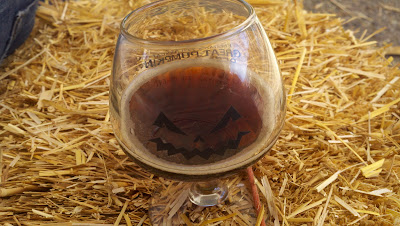 My Jack-O-Lantern Great Pumpkin Fest taster glass
We tried to sample as many different pumpkin beers as we could, as well as the pumpkin donuts and some Dark Of The Moon pumpkin beer ice cream.  I'll detail my tasting notes for each beer we tried in a future post very soon, but some of the standouts for me were: Pumpking by Southern Tier Brewing Company, Pumpkineater by Howe Sound Brewing, Punk'n Bbomb from Fremont Brewing and Punkin Ale from Dogfish Head Brewing. 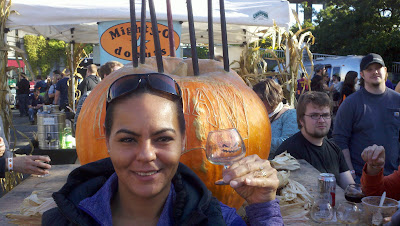 Lynn with The Great Pumpkin
As 4:00PM approached, we prepared for the tapping of The Great Pumpkin.  The crowd surrounding the pumpkin just kept growig & growing until it was tapped, and this year's batch was pretty darn good!

Since the Geogetown area is undergoing some road constrution, finding parking was a bit of a challenge.  So, for those planning to attend tomorrow, I suggest you get there early, especially if you don't have pre-paid tickets!

For those planning on attending tomorrow, I'll see you there!

Drink responsibly and stay safe out there.
Posted by Beer Monger at 6:23 PM