Selecting A Keg Can Be A Challenge 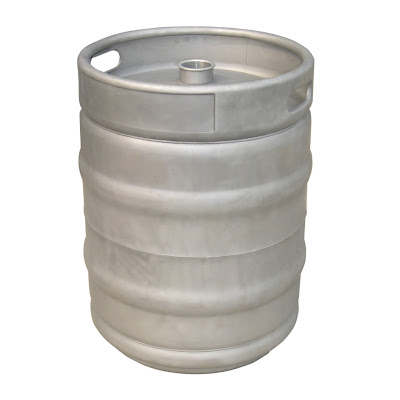 Have you ever ordered a keg or been asked to supply a keg of homebrw for a party?  Whichever way you decide to go, it can be an agonizing decision to make.  If you order a keg, what do you get?  There's a nearly endless supply of beers to choose from.  You can save money if you go with a local brewery - if you have one.

If you go with homebrew, there's a whole other set of considerations.  Do you have a batch ready?  Do you have enough to supply the party?  Are you willing to watch a whole batch of your homebrew disappear in just a few hours - much of it to people you may not even know? 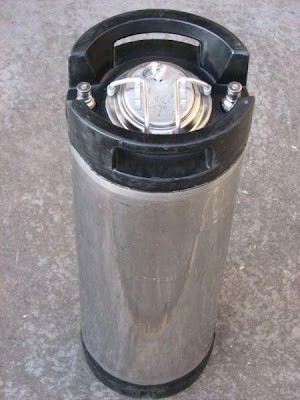 A homebrew 'Cornelius' Keg
In the time before microbreweries and the proliferation of homebrewing, when the keg you'd find at 95% of parties would be Bud, Bud Light or Coors, this was not an issue.  Nobody knew what good microbrew or homebrew was, so everyone was content drinking the same old crap as always.  If you were lucky, your party host would splurge and perhaps get Heineken or Henry Weinhard's instead of Bud.  Ooh, fancy!

Choices, Choices:
In most of today's beer markets, you can find a local keg source that will have a wide range of options for you to chose from, possibly even including some exotic choices from overseas.  We're fortunate here in the Northwest.  We have distributors that can get an amazingly wide variety of different beers in kegs from across the country and around the World.

Distributors:
Going through a distributor, an unfortunate necessity in much of today's beer market, can mean wider selection of beers from farther away but it also means higher prices.  So the farther away you want your beer from, the more it's likely to cost you.  For example, I'm in Seattle, WA.  If I want a keg of Avery IPA (Colorado), it'll run me about $235 for a standard 1/2 barrel keg.  If I want to go even farther away, Ayinger Celebrator Doppelbock (Germany), for example, would be about $225 for a 1/4 barrel keg (half the size of the $235 Avery keg from Colorado).

If I go more local, but still through a distributor, the price drops a bit.  For example, I could order a keg of Elysian The Immortal IPA (Seattle, WA) for about $190 for a standard 1/2 barrel.  That's still a bit on the high side though, since we're still going through the distributor.

Going Local:
The best way to go for ordering a commercial keg of beer, if you have the means, is to go to a local brewery.  We have several in the Seattle area, so when I need a keg I have some choices to make.  Going directly to the brewery instead of through a distributor can save you a lot of money.

For example, that keg of Elysian The Immortal IPA from Elysian brewing right here in Seattle would be $190 through the distributor.  Directly from the brewery, however, the exact same keg of beer is only about $125 - $65 less.  That $65 saved could be used to order another 1/4 barrel from the brewery.

So, if cost is your main consideration (and if your local breweries just happen to have some pretty darn good beer), it's really the best way to go.  The cost is much lower, and for the exact same beer you'd pay more for through a distributor.

Going With Homebrew:
If you are a homebrewer, or you know a homebrewer, you have another option.  Rather than ordering a keg from a distributor or local brewery, you could supply some of your own homebrew or ask a friend to supply the beer for your get together.

As mentioned above, there are a few different considerations if you'll be supplying homebrew as the kegs for a party/event.  Do you have enough homebrew available at the moment to supply what's needed?  If so, are you willing to part with all of that beer; as most kegs get pretty closed to drained at most get-togethers I attend.  Is the beer you have appropriate to the event?  For example, you don't want to serve up a keg of homebrewed Belgian Farmhouse Ale to a group of people who are used to or expecting something more along the lines of Sierra Nevada Pale Ale or worse, to a group of sports fans who are used to Bud and simply won't appreciate the hard work the homebrewer has put in on the beer.

Several years back, I had the opportunity as a homebrewer to supply the beer for a friend's wedding.  It was a lot of work, but it was my gift to them.  I supplied 5 gallons of IPA, 5 gallons of Raspberry Stout and 3 gallons of non-alcoholic Root Beer.  Seeing a group of party guests enjoying your homebrew can be a really satisfying experience and worthwhile if you know those you'll be supplying the beer for will appreciate it.

If you have the means, and if you know your party/get-together guests will appreciate the extra effort, go ahead and break out a keg of homebrew for your next party or get together.  If you don't have the means, find the best keg ordering option you can; be it a distributor or a local brewery, and try to order a beer those attending will enjoy.  If it's a special event, perhaps spend those few extra dollars and get a keg of imported beer from Germany or Ireland or Belgium.  Whichever way you go, make your selection one that everyone can enjoy - don't just shop for your own personal tastes.

Drink responsibly and stay safe out there.
Posted by Beer Monger at 9:25 AM