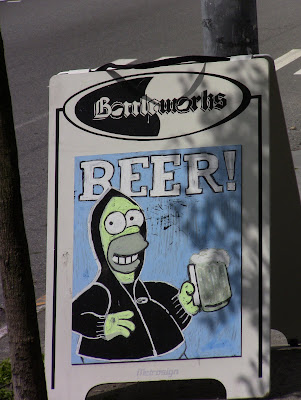 Today, Monday, May 23rd, is the 5th day of Seattle Beer Week.  The first four days have already been a whirlwind of amazing beer-related events and activities, and we still have 6 more days of fun to go.  Thankfully I have today and Tuesday off, but heading back to work Wednesday is gonna be so hard!

So far, I've been able to attend the following Seattle Beer Week events:

-Seattle Beer Week Kick Off at Maritime Pacific Brewing:
You can read all about my experience at this event HERE.  It was a great night filled with good food, great beer, old and new friends alike.  Everyone was having an amazing time in the great weather, and enjoying the Official Seattle Beer Week beer: Decompression Ale.

At the Jolly Roger Taproom at Maritime Pacific
I followed up the SBW Kick Off at Maritime with a brief stop at Uber Tavern.  I wanted to drop by because I'd heard they were having Dogfish Head World Wide Stout on tap as well as Dog Fish Head 120 Minute IPA.  Now, I've had both of these beers before, but it's rare to find them on tap.  Both were amazing.

-Cask-O-Rama at Beveridge Place Pub:
This is an annual event at BPP.  Casks cover the bar and you can have a pint or go with a taster tray.  I chose the latter.  You can see my selections and read a bit more about what I thought HERE.  I hung out here, enjoying myself and the great lineup of Cask beers until nearly 10:00PM, my last event for the night (I had to be at work on Friday!) 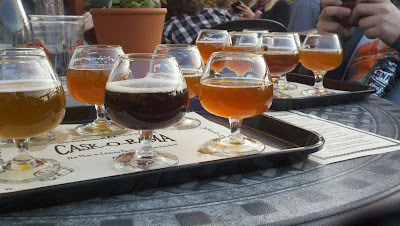 I was unable to attend any SBW events on Friday due to the monthly meeting of my homebrew club, The Impaling Alers.  I had a great time at the meeting with my fellow members, enjoying some great homebrew, and some delicious hummus and salmon dip, both provided at the meeting by my beautiful wife, Lynn.  By the time the meeting/socializing wrapped up, it was nearly 11:00PM.  Time to call it a night.
Day 3 - Saturday, May 21st

-Beer & D'oh-Nuts! at 99 Bottles:
I'd been to this event once before as it's a regular occurrence at the 99 Bottles bottle shop in Federal Way, but this was Seattle Beer Week.  I stopped in, grabbed myself a maple bar and had some beers that fit the breakfast theme perfectly. 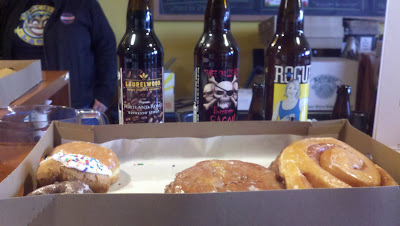 Beer & D'oh-Nuts!
We started with Rogue Somer Orange Honey Ale as our 'Orange Juice'.  A pleasant beer with orange and honey notes and a medium-bodied malt character.  Next up was Three Skulls Bacon Beer.  This one was... well... interesting.  It had an obvious smoky/bacony aroma and flavor.  Interesting to be sure, but I'm not sure I could drink a bacon beer regularly.  It did pair excellently with the maple bar doughnut I had, though!  Last up was Laurelwood Brewing's Espresso Stout.  This was a very nice stout.  Good viscosity, and a great, forward coffee flavor.  So I'd had my orange juice, my bacon and my coffee.  Mission complete!

I had never been to Super Deli Mart before this event.  It's a real treasure, and I highly reccommend a trip down there if you've never been.  Stop in for a sandwich and a pint of beer, fill a growler or two, grab a few fine cigars, etc. all in what's essentially the most 'high class' mini-mart I've ever seen in my life!  I will be back!

The Super-Sized American Brewing Company Stout That Came With My Breakfast
I got the impression that the Brave Horse isn't usually a breakfast place, but they did a good job.  My buttermilk biscuit with stout sausage and country gravy was excellent, as was my wife's eggs & grits.  I went for the SBW brunch special, which inclded the meal I just described, plus an American Brewing Company Stout.  The pairing was excellent.  The thick and slightly chocolaty stout paired great with my biscuit, sausage and gravy.

My Breakfast at the Brave Horse Tavern
That was the last event I had time for on this day of Seattle Beer Week.  Afterwards I had a meeting and dinner with the President of Flying Bike Cooperative Brewery, so we could kick some ideas around.  It was a fun evening though, and Flying Bike President Jeff Hicks' wife makes some great fish tacos.

My BBQ & Beer at Wine World Warehouse
The ribs and brisket were nice and tender, but there was a bit too much fat on the brisket for my tastes.  I always trim the fat cap to 1/4" or 1/8" before smoking a brisket - the fat on this brisket, after cooking was 1/2" thick or more.

Grabbin' Some Q
For my beer pairings, I tried both Boulevard's Single-Wide and Double-Wide IPAs (obviously, this is their regular IPA and their 'double' IPA).  They were clean and refreshing, but a bit light on the hops.  They were proud of this for their Single-Wide, believing that too many regular IPAs are over-hopped.  They may be right, but being from the Northwest, we Love our hops!  The Double-Wide was pretty good, but still, in my opinion, too light on the hops for a double IPA.  Lastly, I tried their Belgian Farmhouse style.  While this is not usually a favorite style of mine, this one was pretty tasty.  I'm learning to appreciate the Belgian styles more and more.

-Instrument vs. Ornithoid (A Firestone Walker event) at Bottleworks:

My Wife, Lynn, With Sean Paxton (The Homebrew Chef), Matt Bonney of Brouwer's Cafe and David Walker of Firestone Walker Brewing at Bottleworks
This was a super-crowded but super-fun event featuring some amazing Firestone Walker beers.  They had Firestone Walker's 14th Anniversary Ale, which was a blend of 8 different Firestone Walker vintages Double Double Barrel Ale, Sticky Monkey, Parabola, Velvet Merkin, Good Foot and Black Xanthus).  It was delicious.  Extremely complex malt character and pleasing Oak flavors and aromas.  The beer blenders at Firestone are clearly masters of their craft.

Bottles Signed by David Walker & Sean Paxton
I also got to finally meet in person at this event, Sean Paxton, the Homebrew Chef.  He, along with David Walker, will be teaming up for the Firestone Walker v Homebrew Chef dinner I'll be attending tonight at Brouwer's Cafe.  I can't wait!

-HotD Crashes Bottleworks:
My wife and I were having such a great time at Bottleworks that we were barely able to tear ourselves away for a quick lunch nearby before coming back for this event a few hours later at Bottleworks.  Another of my favorite breweries, Hair of the Dog was there with a few special releases.

Today's Tap List at Bottleworks for the Firestone Walker & Hair of the Dog Events
We were able to sample Hair of the Dog Cherry Fred and Hair of the Dog Bokor Blend (also on tap were Fred, Adam, and Blue Dot IPA).  The Cherry Fred was a big beer.  Great Fred-like flavor, followed up strongly by a slightly sour cherry flavor and complexity.  Honestly, the amount of sour cherry flavor was almost too much.  Definitely a sipping beer and I'm not sure I could handle more than one at a sitting.  The Bokor Blend was a bit of misnomer.  The name would almost have you expecting a Bock blend.  Wrong.  This was a strong ale, with alcohol warming and slight cognac notes.  A great beer but another you really have to just sip.

We had a great time at this event too, hanging around at Bottleworks for hours and meeting a few new friends before finally making our way to one of our new friends houses nearby to relax and perhaps enjoy a few of the bottles we'd purchased.  This was our last SBW event for today.

Today, I plan on attending THIS IS WASHINGTON, DAMMIT!  at Beveridge Place Pub.  24 of their 25 taps will have all and only beers from Washington breweries today.  24 taps - 24 breweries!

Also, if I can find the time, I'd like to stop briefly by Cooper's Alehouse for their Georgetown Brewer's Night (starting at 2:00PM, when Cooper's opens).  Georgetown is a brewery that focuses primarily on lager beers - but from what I've heard and tasted a bit of myself, they're pretty darn good at it.

Last, but most definitely not least, tonight I will be attending the Firestone Walker v Homebrew Chef dinner at Brouwer's Cafe at 6:00PM.  This will be an 8-10 course Cajun inspired meal, paired with 10-12 different Firestone Walker beers.

Me With Sean Paxton - The Homebrew Chef
I also got a little scoop yesterday about one of the beers for the dinner.  Firestone's 'Sticky Monkey' has never been available on it's own.  It was always used as a blending beer.  Well, tonight I believe I may get to sample Sticky Monkey by itself - unblended with anything else.  I'll let you know.  Needless to day, I'm really looking forward to this dinner.  I won't be eating much today until 6:00PM.  A full report will follow.

SEE MORE PHOTOS FROM THESE EVENTS AND ALL THE SEATTLE BEER WEEK EVENTS I'LL BE ATTENDING BY CLICKING THIS TEXT. (And if you find yourself, tag yourself!)

Drink responsibly and stay safe out there.
Posted by Beer Monger at 11:48 AM